The Rise of Packets

In parts one and two of Learning the Language of Telecom, we looked at some of the key terms that call center owners and administrators need to understand about the traditional public switched telephone network, or PSTN. In this post, we’re going to guide you through the landscape of internet telephony, so that you understand the basic differences and can talk the talk when the conversation turns to VoIP, SIP, and IAX.

The Rise of Packets

When you call your friend to say, “I am going to eat lunch at the park after taking my dog to the vet,” you take it for granted that they’re going to hear it correctly. At the heart of every phone call that is carried across the public switched telephone network (PSTN) is a calibrated transmission of sound between two parties on one line, connected by circuits and switches that span the globe. When you speak into the phone, your voice is converted into signals which are transmitted across the network and then converted back into audio by the person you’re calling. The key here is that all those signals are transmitted and received in order and that you don’t have to worry that your friend is going to hear “I am going to eat my dog at the park after taking lunch at the vet.”

But the internet doesn’t carry information in a strictly linear process. Instead, it delivers packets of information. Imagine mailing ingredients for a recipe to a relative, and sending each one in an envelope (one with salt, one with pepper, one with chili powder, etc.). The idea is that when those envelopes are delivered, your relative could open them up, empty them in a pot, and start cooking. The order wouldn’t matter if all the packets reached their destination.

Conducting phone calls on the internet, or Voice over Internet Protocol (VoIP), required a new generation of network technology to ensure that each packet of information created when a caller speaks is sent and received in the right order and that they’re delivered in half of the time that it takes to blink your eye (150 milliseconds).

While the traditional definition of protocol refers to customs and etiquette, computer protocols refer to the rules surrounding the format of information exchanged between two parties. This is complicated by the fact that, instead of sharing one line, Internet exchanges require two streams, one for each party. Each protocol was designed to solve the problem of efficiently slicing and dicing the information and enclosing them into packets, and delivering those packets quickly and flawlessly.

You may wonder what has driven such complicated innovation, but the primary reason is simple: VoIP offers cost savings that are an order of magnitude lower than using the PSTN.

SIP stands for Session Initiated Protocol and is used to establish, modify, and terminate internet phone calls. It is a widely accepted and increasingly popular protocol, due primarily to its flexibility. Since SIP is dedicated to starting, maintaining, and ending a call, it helps provide a measure of reliability that users expect when using the phone.

What’s important to understand is that it isn’t actually carrying the information across the network. It relies on the Realtime Transport Protocol, or RTP, to transfer the voice or data packets between two ports, one for each stream. SIP devotes a third port for signaling, whether it is to begin a phone call, terminate a call, or add additional parties to the call.

So, if your call center uses SIP and you have 50 agents making calls, they will require 100 ports, plus one port for signaling (which is shared across all users).

The T38 protocol defines how a fax should be sent over a digital network. A fax cannot be sent in the same way voice packets are transmitted. The Fax was originally designed to work on analog networks and special considerations must be made when switching over to a VoIP based phone system. In particular, the use of an ATA (Analog Telephony Adapter) that supports the T38 protocol is necessary for older equipment. Many VoIP providers support the T38 protocol and will readily provide service that ensures your FAX reaches its destination.

As opposed to a traditional private branch exchange (PBX), an IP PBX is a private branch exchange that switches calls between VoIP users on local lines while letting all users share a fixed number of external phone lines. SIP trunking provides a virtual connection between VoIP users and the PSTN, allowing them to make direct calls to any phone on the PSTN without traditional phone lines by connecting to a hosted PBX system. Putting these terms together, a call center operator needs to know that: When evaluating on-premise vs. hosted IP private branch exchanges, keep in mind that an on-premise IP PBX requires a strong network infrastructure. A hosted IP PBX system, on the other hand, is delivered via the cloud. A third party manages the IP PBX, including set-up, maintenance, upgrades, and monitoring bandwidth, while guaranteeing quality and uptime.

With this brief introduction to the language of telephony, you should be better prepared for the conversations ahead. To learn more about finding the right VoIP solution for your call center, contact Voxtelesys today.

Read more articles in this Explain It! series: 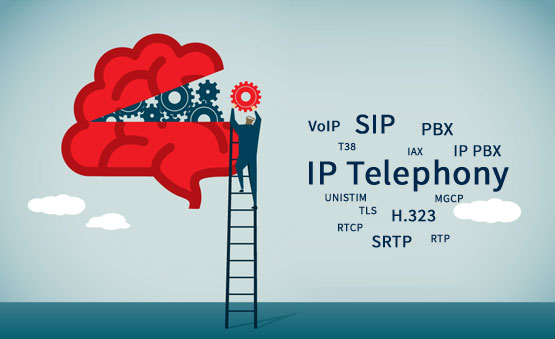